The fight against malaria has seen a decade of remarkable success and progress. It remains, however, a threat to half of the world’s population with more than 200 million new cases of malaria and claims the lives of almost half a million people every year, the majority of whom are children under five years of age. According to the WHO 2016 World Malaria Report, 92 per cent of malaria deaths occur in sub-Saharan Africa. To end this massive suffering, the current tools are not sufficient. More research and development is needed to improve the prevention and management of malaria in the context of elimination. 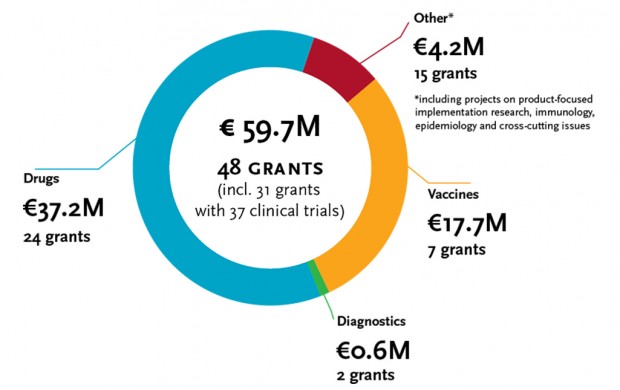 For its malaria research funding strategy, EDCTP has prioritised the following areas:

“The fight against malaria requires a concerted effort of various partners. We prioritise R&D on novel drugs and drug combinations, studies in high-risk populations such children and pregnant women, and malaria patients with co-infections. For prevention, we aim to invest in chemo-prevention for high-risk populations and development of second generation vaccines against both Plasmodium falciparum and vivax malaria.”

Malaria in pregnancy is estimated to be responsible for 35% of newborns with preventable low birth weight. Low birth weight is a strong predictor of infant mortality, childhood morbidity and productivity in adult life. WHO recommends sulphadoxine-pyrimethamine (SP) for women without malaria symptoms as preventive treatment in pregnancy (IPTp). However, its efficacy is threatened by increasing SP resistance, while there are no acceptable alternatives. Over the last decade, several IPTp trials showed that neither amodiaquine, nor mefloquine, nor chloroquine-azithromycin is a suitable replacement for SP because of their poor tolerability for pregnant women. Furthermore, intermittent screening for malaria and treatment with artemisinin-based combination therapies has shown to be non-superior to IPTp-SP even in areas with very high SP resistance.

The IMPROVE project, led by Professor Feiko ter Kuile (Liverpool School of Tropical Medicine, United Kingdom), aims to address this clear and urgent need for alternative drugs for malaria prevention in pregnancy. Two earlier exploratory trials from Kenya and Uganda showed that dihydroartemisinin-piperaquine (DP) has the potential to replace SP for malaria prevention in pregnancy. It was more effective than SP in reducing malaria infection and clinical malaria. As both trials were small and not powered to assess birth outcomes, WHO concluded in 2015 that definitive multi-centre trials were needed before IPTp-DP can be recommended for health care use.

Therefore, IMPROVE will evaluate the use of DP (with and without azithromycin), as an alternative to SP for intermittent preventive treatment (IPTp) for control of malaria in pregnancy. The project received a €7.4 million grant from EDCTP and is a collaboration of partners from Denmark, Finland, Kenya, Malawi, Norway, Tanzania and the United Kingdom. Additional funding of £2.7 million was provided by the Joint Global Health Trials, a partnership of the UK Department for International Development, the UK medical Research Council, the National Istitute for Health research and the Wellcome Trust. The grant made it possible to include a trial with HIV-infected pregnant women alongside the main study with HIV-uninfected participants. The project aims to provide WHO with definitive evidence to determine whether IPTp with DP (with or without AZ), is a viable alternative to the IPTp with SP. A positive result would improve the outcome of pregnancies in areas of the world with moderate to high malaria transmission and high parasite resistance to SP.

The IMPACT project is funded under the EDCTP 2014 call for proposals to accelerate the translation of research findings from an earlier EDCTP-funded project into health care policy and practice. IMPACT is led by Dr Anja Terlouw (Liverpool School of Tropical Medicine – LSTM, United Kingdom), received a grant of €0.5 million and is a collaboration of partners from Malawi, South Africa and the United Kingdom. Drug safety data from three clinical trials of the EDCTP1-funded ADAPT project which was led by Dr Victor Mwapasa (Malawi), will be an important contribution to the IMPACT project. The antimalarial dihydroartemisinin-piperaquine (DP) is highly efficacious against uncomplicated malaria and is also considered the most promising antimalarial for drug-based efforts to reduce malaria transmission, such as mass drug administration. However, widespread use of an antimalarial among unselected populations requires a drug with a wide therapeutic dose range and excellent safety profile. As DP has a relatively narrow safety margin, this would pose a challenge, especially for children (possibly under-dosed) and for certain groups at risk for cardiac problems (uncertainty about the safe concentration threshold). This uncertainty has led WHO to consider a complex weight-based regimen which hampers a safe and effective introduction of DP into national control programmes. The project aims to determine the frequency and severity of DP cardio-toxicity, and its correlation with dose and drug concentration. The analyses will use two pioneering data sharing platforms on antimalarial efficacy and safety, developed by WWARN (Worldwide Antimalarial Resistance Network) and LSTM. Findings will be used to update the upper PPQ dose thresholds (across key risk groups) and identify remaining research priorities. Addressing these challenges will also be useful to develop a more standardised process for antimalarial dose optimization and raise awareness of dose optimisation research priorities among researchers, funders and control programmes. The results of the project will contribute to policy decisions on DP dosing regimens. Beyond DP, it will demonstrate the importance of identifying global research priorities for targeted antimalarial safety studies and of integrating pooled individual level safety analyses into WWARN’s global efficacy data platform. Linking efficacy and safety data offers a powerful standardised process for dose optimisation, possibly also applicable for other drugs.

As part of its research capacity development strategy, EDCTP also supports African expertise and scientific leadership through training, mentoring and by providing career development opportunities for African researchers, from master’s and PhD training through to senior fellowships.

Professor John Lusingu, Tanzania, received a Senior Fellowship for a study that aims to generate data on malaria epidemiology, severe malaria in children and pregnant women and their newborns. The data generated will be shared with collaborators from the University of Copenhagen in Denmark to support the development of a new malaria vaccine candidate.

Clinical research activities initiated by EDCTP member countries (or Participating States) within the scope of the EDCTP programme can be considered to be part of the programme. These projects, called PSIAs (Participating States’ Initiated Projects), are supported with national funding and independently executed by European and African member countries. The PSIAs are important as they directly contribute to achieving the EDCTP objectives and are incorporated in the EDCTP work plans.

Some examples of PSIAs on malaria vaccines and diagnostics are: