On this year’s International Women’s Day, EDCTP joins the global health community in celebrating women’s achievements, raising awareness against bias, and taking action for equality. We celebrate the rising number of female researchers throughout our funded projects and especially in our individual fellowship grants to develop scientific leadership and world-class competitiveness.

“We need to confront the implicit and systemic biases that lead to women being underrepresented in higher ranks of academic and global health scientific endeavour. Striving to achieve gender equity in research – and closely monitoring progress toward this goal – will foster the diversity and inclusiveness that improves the science.”

Equity in research for health

In many sub-Saharan African countries women are underrepresented in health research, both as a researcher and as a participant. EDCTP actively strives to improve women’s health as well as their research careers. 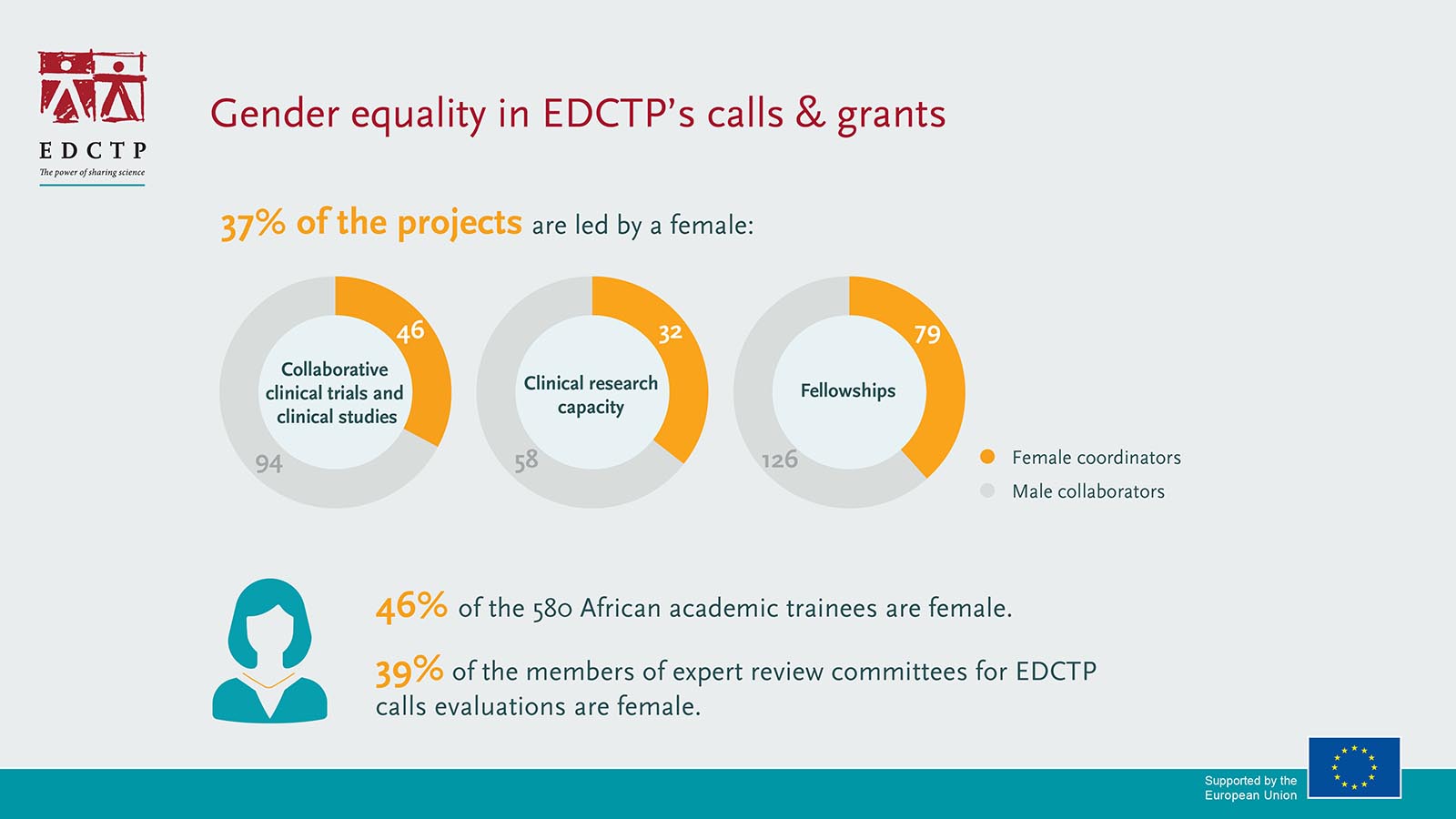 Female scientific leadership in sub-Saharan Africa is evident from EDCTP fellowships across 24 countries in Africa where 39% of EDCTP2 fellows are women, compared to 27% in the EDCTP1. More women are embarking on research careers: 46% of postgraduate (PhD and Masters) trainees on EDCTP2 projects across 33 African countries are women. EDCTP promotes participation of women in its review procedures, with 39.5% of reviews submitted by female experts and a similar distribution for experts in Europe and Africa.

Addressing regional and gender disparities in health research in sub-Saharan Africa was the topic of discussion at a joint workshop organised by EDCTP and Africa Centres of Disease Control and Prevention (Africa CDC) in Addis Ababa on 19 and 20 November 2019. The findings and recommendations aimed to identify collaborative strategies to improve the distribution of funding and align EDCTP efforts with those of like-minded partners. This led to an EDCTP call ‘Towards addressing gender and diversity capacity gaps in clinical research in sub-Saharan Africa’ supported by the UK Department of Health and Social Care (DHSC). The EDCTP Regional Networks of Excellence coordinate the fellowship programmes which recruit female PhD students across Africa:

The Capacity building for Female Scientist in East Africa (CaFe-SEA) project funded by the UK Department of Health and Social Care (DHSC) in partnership with EDCTP is supporting female PhD scientists in Eastern Africa focusing on emerging and remerging infections. The first five candidates have been selected and will start their training. The programme will include specific courses prescribed by the enrolling universities in Eastern Africa and will be coordinated through the existing EACCR Network. 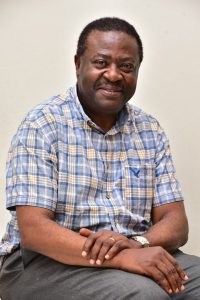 Pontiano Kaleebu, coordinator of EACCR’s CaFe-SEA project: “This project aims to build capacity for research among junior female scientists which for long has remained a challenge in the region. We proudly support five fellowship candidates and believe they will become future research leaders.”

This biennial prize is awarded to world-leading female scientists in sub-Saharan Africa working on HIV/AIDS, tuberculosis, malaria and neglected infectious in the scope of the EDCTP2 programme. The prize is awarded to female scientists who have made a significant scientific contribution and built measurable impactful research capacity through training and mentorship for the future generation of researchers/scientists in Africa. In October 2021, Professor Margaret Gyapong received the EDCTP Outstanding Female Scientist Award for her scientific contribution and measurable impactful research capacity.

Enhancing the position of women in clinical trials and beyond

Underpinning EDCTP’s funding approach is our focus on populations that are often excluded from clinical studies but that have major unmet medical needs – including pregnant women, newborns, children, other vulnerable populations, and people with co-infections and co-morbidities.

Scientific research has a history of including a male-only study population. Women’s and men’s bodies receive medical products differently in terms of absorption, distribution, metabolism and elimination. This systematic exclusion of women from health research, and especially clinical trials, has halted the progress of the under-researched area of women’s health and has slowed down the realisation of health equity.

Additionally, women are affected by gender inequalities such as the disproportionate load of domestic and caregiving chores, lack of autonomy in terms of decision-making and freedom of movement, lower educational enrollment rates, and higher exposure to gender-based violence. These gender-based variables negatively affect women’s access to health care, health-seeking behaviour, and adherence to treatment.

Building the capacities of West Africa in research ethics (BCA-WA-ETHICS-II) is one of the projects supported by EDCTP from the earliest phases that aims to increase equitable inclusion of women in clinical trials and socio-epidemiological studies through gender mainstreaming in health research ethics. The project supports ethical research regulators and evaluators such as National Research Ethics Committees (NRECs) and Institutional Review Boards (IRBs) in research protocol appraisal using sex- and gender-based analysis. The project also created a free-of-charge Virtual Research Ethics Secretariat providing technical assistance to the NRECs of the 15 West African countries through webinars, workshops, and sex- and gender-sensitive research protocol evaluation tools. In collaboration with the Benin NREC, the project has published a White Book of Recommendations for Gender Mainstreaming in National Research Ethics Committees in West Africa which contains hands-on guidelines for gender equality planning and sex- and gender appraisal in research protocols.

Farah Nabil, Project Manager of the BCA-WA-ETHICS II project: “Gender mainstreaming in health research goes beyond the systematic inclusion of women in clinical trials. It also means taking into account how existing gender inequalities affect women’s access to and uptake of health care interventions. We call on all ethics committees to include gender mainstreaming as a standard consideration in their reviews and procedures. Ethics committees are in a position to end the conduct of sex- and gender-blind research. The White Book can assist ethics committees in this process. It takes a lot of time, effort and capacity building to achieve gender equity, but in the end, it will lead us towards sustainable development of West African populations and health for all.”

The impact of COVID-19

Women have been heavily affected by the COVID-19 pandemic both by an increase in – often unpaid – carer duties, and experiencing additional barriers in their careers. Of all COVID-19 projects that have received a grant, 44% are coordinated by female applicants.

Very little is known about the specific impact of COVID-19 on pregnant women: whether the virus can be transmitted to babies in the womb, and whether maternal antibodies might be transferred across the placenta. This is particularly the case in sub-Saharan Africa, where infection with HIV, TB, syphilis or malaria could add further complications. Moreover, maternal and neonatal mortality rates are still high, and only around half of mothers receive the recommended four antenatal health visits. The periCOVID-Africa project is generating vital data on COVID-19 infections in pregnant women and their babies in sub-Saharan Africa.

The project builds on the EDCTP-funded PREPARE study which follows up 70,000 women in Uganda from the early stages of pregnancy and infants up to the age of three months to gain a clearer picture of the burden of group B streptococcus infections and to establish surveillance mechanisms. The project will evaluate two vaccines against group B streptococcus at a trial site in Uganda, being developed under EDCTP funding. The partners in this PREPARE study have extended their network of collaborators to Kenya, Malawi, Mozambique, Norway and The Gambia to assess existing pregnancy and neonatal cohorts in these countries to better understand COVID-19 impacts on pregnancy and immune responses in mothers and babies. 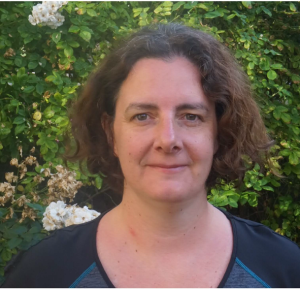 Kirsty Le Doare, chief investigator of the periCOVID and PREPARE projects: “The PREPARE study aims to put pregnant women front and centre of clinical vaccine trials by working with women to design and conduct studies equitably and ethically. It’s by involving women every step of the way that I believe we can achieve equity in health.”

Philippa Musoke, principal investigator of the PREPARE and periCOVID studies in Uganda: “The PREPARE study works with pregnant and breastfeeding women to develop and undertake clinical vaccine trials to improve maternal and child health globally. I am happy that we can build on this work and gain more insights in women’s health through the periCOVID-Africa project.”