The Leprosy Research Initiative (LRI) and EDCTP created a partnership to boost leprosy-related research. They aim to leverage resources and pool funds to support clinical and implementation research in sub-Saharan Africa, particularly in relation to leprosy and neglected infectious diseases (NIDs) that are co-endemic with leprosy.

This collaboration is envisaged in the context of two EDCTP calls for proposals targeting NIDs that will be launched by EDCTP in the course of 2017*. The funding agreement was signed by LRI Director Mr Jan van Berkel and for EDCTP by Dr Michael Makanga, Executive Director, and Mr Abdoulie Barry, Director of Finance & Administration, on 12 May 2017. 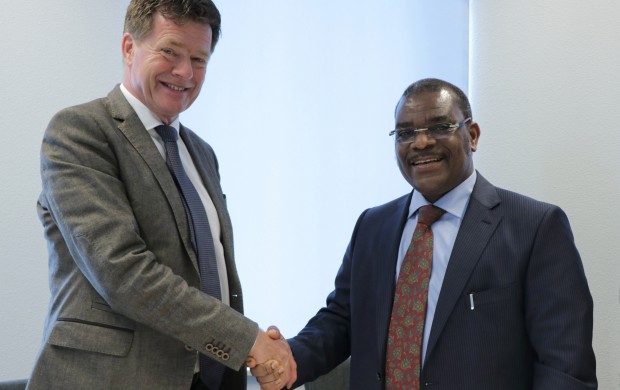 “EDCTP greatly welcomes the opportunity to collaborate with the Leprosy Research Initiative. Leprosy belongs to the family of bacteria that causes tuberculosis, and with the extension of our scope to include NIDs, we can now support leprosy-related research. This increases potential for improved north-south and interdisciplinary collaborative research”

The Leprosy Research Initiative (LRI) is an important funder of international research on leprosy and related issues, which allocates about €1.5 million a year to scientific and operational research. The LRI is a combined venture of the Netherlands Leprosy Relief (NLR), American Leprosy Missions (ALM), effect:hope (The Leprosy Mission Canada) , German Leprosy and Tuberculosis Relief Association (GLRA), and The Leprosy Mission International (TLMI). Guided by a joint policy with clearly defined research priorities, the five partners have established a joint fund to support leprosy research. In 2017 LRI is funding 22 research projects.

* Pending the formal approval of the EDCTP 2017 work plan by the European Commission.