The EDCTP-funded awards are awarded on the basis of a number of criteria including: innovation/ Intellectual Property, impact of research, publications and advocacy for health. The award consists of a certificate of recognition together with a cash prize of EUR 10,000 for one junior scientist (under 30 years old) and EUR 20,000 for one senior scientist, and aims at fostering the research activities of the winners, with the ultimate aim of strengthening clinical research capacity in sub-Saharan Africa.

Prof. Salim Abdool Karim (University of KwaZulu Natal, South Africa) has been enormously successful throughout his career, and has made numerous seminal contributions to our understanding of HIV and TB epidemiology, and more recently to optimising treatment at the intersection of the TB and HIV epidemics, and optimizing prevention of HIV transmission. It is hard to imagine a research program more relevant to the most pressing global health problems facing not just Africa but the world, nor a single individual who has had more impact on building local scientific capacity. More recently, he has established long term collaboration with Howard Hughes Medical Institute (HHMI) that is creating the world’s first research program dually dedicated to integrated TB and HIV research. There are truly incredible accomplishments. 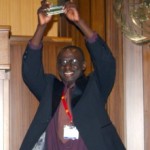 Mr. Hannock Tweya (Lighthouse Trust, Malawi) serves as the epidemiologist, monitoring and evaluations officer, and operations research supervisor for the Lighthouse. Mr. Tweya’s long publication list for one so young, reflects his integral involvement in the research operations. Data from the Lighthouse influences both Malawian and sub-Saharan ART programs. Mr. Tweya is often the creative force for the development of the protocols.