This prize is awarded to excellent world-class scientists in sub-Saharan Africa up to 50 years of age working on HIV/AIDS, tuberculosis, malaria and neglected infectious diseases (NIDs) in the scope of the EDCTP2 programme.

Objective of the prize

The prize recognizes scientists who have made significant achievements in their field and will continue to become leaders in their research field. In addition to their scientific excellence, the contestants should have made major contributions to the objectives of the EDCTP2 programme to strengthen research capacity in sub-Saharan Africa and to support South-South and North-South networking.

This prize of €10,000 should be used to further the research programme of the awardee and may support activities towards training and mentorship of the future generation of researchers in Africa.

Recipients of the Scientific Leadership Prize

Professor Keertan Dheda’s research work has focused on the epidemiology, diagnosis, and transmission of tuberculosis. He has made seminal contributions to the field of TB, has an outstanding publications record and is the recipient of several prestigious awards including the International Union Against Tuberculosis and Lung Disease Scientific Award.
Read more » 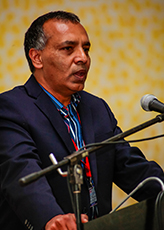