On World Malaria Day 2021, EDCTP joins all partners in the ‘Zero Malaria – Draw the Line Against Malaria’ campaign towards the goal of malaria elimination. Towards malaria research & development, EDCTP has invested more than €150 million to support a portfolio of 64 research projects conducted by African-European consortia and research fellows in Africa.

These projects support the development of innovative products – diagnostics, drugs and vaccines – needed to manage, control and eliminate malaria. EDCTP funding progressed the development of the R21 vaccine that recently demonstrated greater than 75% protection in a recent phase II trial. The EDCTP malaria portfolio also includes studies on implementation of interventions and activities to strengthen health systems, essential to ensure successful roll-out of new and existing products, and to contribute to the malaria eradication agenda.

“We must not waver in our efforts to control and steadily move towards malaria eradication, despite the COVID-19 pandemic and other challenges. The recent exciting results from the clinical development of the R21 malaria vaccine in Burkina Faso bring us a step closer to a highly effective malaria vaccine. We remain committed to support the development of new and improved products for the diagnosis, prevention and treatment, as well as product-focused implementation research to ensure that these products reach the populations that need them most.” 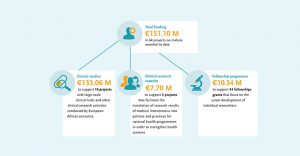 Overview of all grants to malaria projects.

Sixty EDCTP-funded malaria research projects are conducted in 26 African countries including the ten with the highest malaria burden globally. They involve a total of 104 African institutions (see map below). EDCTP funding is focused on efforts to protect populations most at risk, including infants and children, pregnant women and people with co-infections and co-morbidities.

EDCTP’s funding approach aligns with the strategy of WHO and the RBM Partnership to End Malaria which have launched the ‘high burden to high impact’ approach, a mechanism to support the eleven countries with the highest malaria burden to get back on track to achieve the milestones set for 2025. These eleven countries – India and ten countries in sub-Saharan Africa (Burkina Faso, Cameroon, the Democratic Republic of the Congo, Ghana, Mali, Mozambique, Niger, Nigeria, Uganda and the United Republic of Tanzania) are estimated to account for 70% of the case burden and 71% of deaths from malaria.

EDCTP also participates in the WHO R&D Blueprint Global Coordination Mechanism, several workstreams coordinated by the WHO Global Malaria Programme to address the double challenge of malaria and COVID-19. Moreover, product development partnerships, such as Medicines for Malaria Venture, PATH and the European Vaccine Initiative, are important partners to achieve the goal of malaria control and elimination. 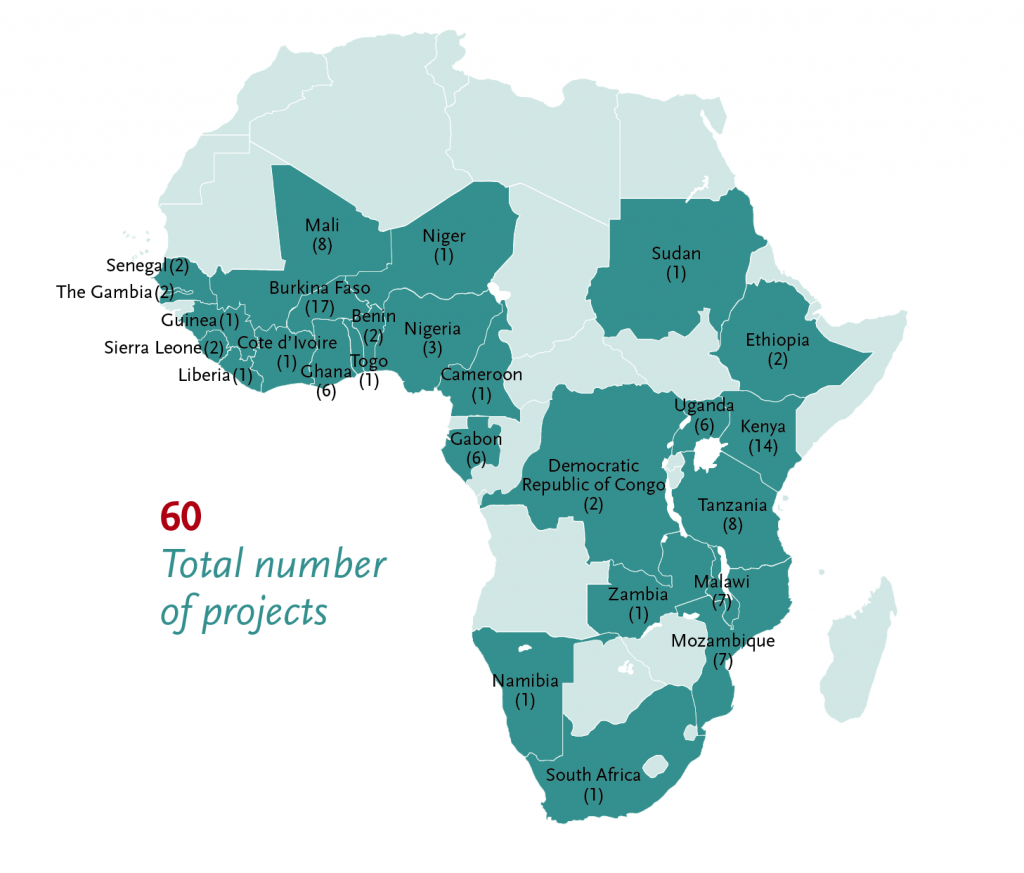 The Multi-Stage Malaria Vaccine Consortium (MMVC) is coordinated by Professor Adrian Hill (Oxford University, United Kingdom). It aims to develop the first multi-stage vaccine for malaria designed to target all four stages of the Plasmodium falciparum parasite’s life-cycle. This ambitious project, funded by EDCTP with a grant of €15 million, comprises a series of tightly coordinated trials building towards a phase IIb efficacy trial. Since the start of the project in 2018, trials have started in Kenya, Tanzania and Burkina Faso.

OPT-SMC
Seasonal malaria chemoprophylaxis (SMC) is an intermittent administration of full treatment courses of antimalarial medicine to children in areas of high seasonal malaria transmission. SMC has been shown to reduce childhood deaths from malaria by 44-57% in districts in Burkina Faso, The Gambia, and Senegal. Although countries have been quick in adopting SMC as a policy, it has been shown that in 2017 less than 50% of eligible children had access to SMC and in areas where SMC is being implemented, only about 50% of children received all the required monthly treatments. The EDCTP-funded OPT-SMC project aims to improve the coverage of SMC.

The project is led by Dr Jean Louis Ndiaye, University of Thies, Senegal. It brings together partners in 14 countries, including the 12 currently implementing SMC (Burkina Faso, Cameroon, Chad, Gambia, Ghana, Guinea, Guinea Bissau, Mali, Niger, Nigeria, Senegal and Togo), and 2 planning to start SMC (Benin, Mauritania). The project aims to optimise the implementation of SMC. If high levels of SMC coverage can be consistently achieved in all countries and all regions within countries with SMC programmes, this may lead to a substantial reduction of childhood deaths from malaria.

Nearly a third of Kenya’s 51 million people live in malaria-endemic zones with millions more exposed to the seasonal transmission of the disease. Malaria is one of the leading causes of morbidity and mortality, and pregnant women are especially susceptible to malaria infection. Malaria infection during pregnancy (MiP) is one of the most common causes of spontaneous abortion and has a devastating impact on health outcomes for mothers and infants leading to severe maternal anaemia, low infant birth weight, preterm delivery and stillbirth. Intermittent preventive treatment of malaria in pregnancy using sulfadoxine-pyrimethamine (IPTp-SP) is a longstanding clinically proven safe cost-effective life-saving medical intervention for the prevention and management of malaria in pregnancy.

Despite Kenya’s adoption of this WHO-recommended intervention in its national policies and guidelines in 1998, uptake has been persistently low. The Revive IPTp-SP project aims to revitalise IPTp-SP in Kenya through a collaboration with the national malaria control programme (NMCP). The programme aims to close the gap with the national target of 80% coverage of IPTp-SP for pregnant women by 2025. The Revive IPTp-SP project is led by the Population Council Kenya and works in partnership with the NMCP, the Reproductive Maternal Health Services Unit, the Kisumu Medical and Education Trust, county health management teams and the Midwives Association of Kenya.

ADAM
The ADAM project is led by the Fundaçao Manhiça, Mozambique in partnership with the Fundación Privada Instituto de Salud Global Barcelona (ISGLobal), Spain. It collaborates with the NMCP in Mozambique. The project aims to support the national programme to develop a policy for mass drug administration for malaria and its effective implementation in the national strategic guidelines. It will contribute to strengthening the functionality and performance of the NMCP and the health system in Mozambique.

Project activities include the development of an optimised delivery strategy and a monitoring plan for the implementation of programmatic mass drug administration. A data collection and visualisation system will be developed to facilitate the monitoring and supervision of the activities. The feasibility and operational performance of the delivery strategy will then be assessed. A policy and guidelines for mass drug administration in Mozambique will be developed in direct engagement with the WHO Malaria Elimination Technical Working Group.

TESA, the EDCTP-supported regional Network of Excellence for southern Africa, works together with the Elimination Eight Initiative (E8), a coalition of eight countries working across national borders to eliminate malaria in southern Africa by 2030. As the malaria response arm of the Southern Africa Development Community (SADC), the E8 is pioneering an ambitious regional approach and driving collective action to end malaria once and for all. Certain that the countries are stronger when working together, the E8 is building a model that will inform coordinated efforts in southern Africa and beyond.

Dr Dominic Mosha evaluates the safety of single low-dose primaquine co-administered with artemisinin antimalarials in routine healthcare practices. The aim is to study the implementation of a WHO-recommended primaquine treatment regime. Dr Vivi Maketa is testing whether combining the use of a rapid malaria diagnostic test with preventive treatment with the antimalarial Pyramax® can protect pregnant women in Kinshasa, the Democratic Republic of the Congo (DRC), where malaria transmission takes place all year round.

The EDCTP2 programme also includes projects that are initiated and funded by EDCTP member countries independently. These so-called Participating States’ Initiated Activities (PSIAs) contribute to the EDCTP programme and its objectives.

Norway supported research on malaria chemoprevention for the post-discharge management of severe anaemia in children in Malawi, Uganda and Kenya. The results show that the intervention reduces death or re-admission by 35%. The data will likely support a general recommendation in the WHO East Africa Region. Better management of severely ill children will reduce the associated health care costs to poor households.

The results from an implementation trial in Malawi indicate that adherence by parents is higher if drugs are distributed to the parents through community-based methods. Facility-based distribution was found to result in lower adherence. These results, too, are expected to inform the discussion on a regional recommendation.

The United Kingdom supported a fellow of the UK Medical Research Council to conduct a comprehensive analysis of the relationship between housing quality and malaria across sub-Saharan Africa. This provided the first known direct comparison with insecticide-treated nets (ITNs).

The study concluded that housing quality is an important risk factor for malaria infection. Therefore, it recommended that improving housing should be considered a promising intervention. These findings influenced the WHO Global Vector Control Response – a global plan for improving disease vector control 2017-2030 – in which improving housing is strongly advocated as an inter-sectoral approach to vector-borne disease control. It is a landmark document as previously housing has not been considered important for malaria control.