On this year’s World Malaria Day, EDCTP joins its partners and stakeholders in harnessing innovation to reduce the malaria disease burden and save lives. EDCTP has dedicated over EUR 150 million funding towards achieving the 2030 targets of the WHO global malaria strategy. We remain committed to reducing the burden of malaria among vulnerable populations that are often excluded from clinical studies but that have major unmet medical needs. We do so by supporting the development of innovative products – diagnostics, drugs and vaccines – and the implementation of interventions and activities to strengthen health systems.

The EDCTP malaria portfolio comprises 65 projects, from large-scale international collaborative clinical research projects implemented by African-European research consortia, through to projects conducted by EDCTP Fellows who are leading the malaria research agenda in Africa. Our portfolio includes several large-scale projects testing some of the most advanced new vaccine and drug candidates that could contribute significantly to the malaria eradication agenda. 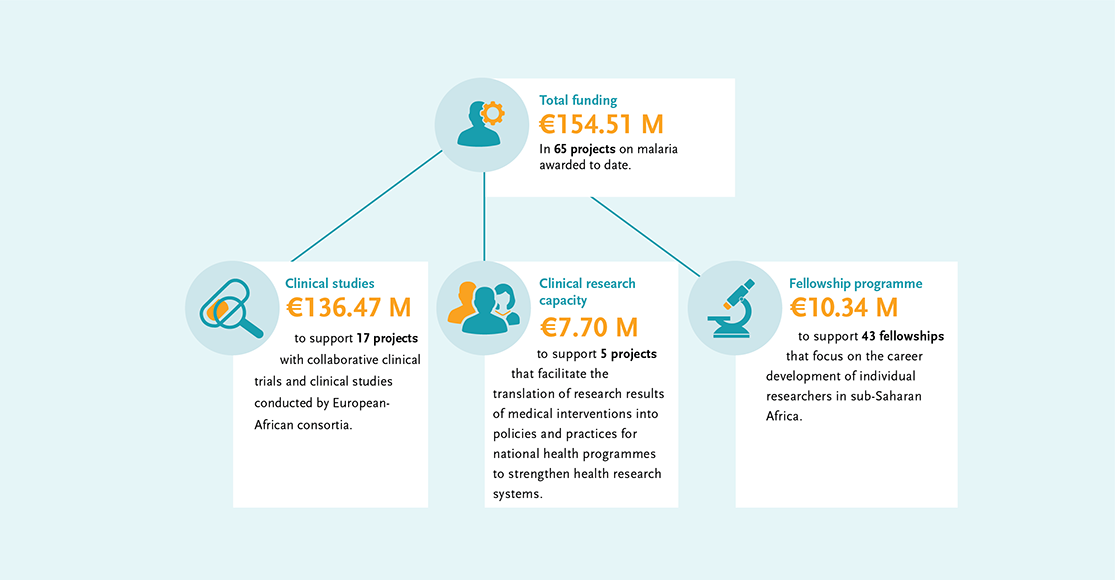 EDCTP’s malaria portfolio has a strong focus on prevention and treatment of malaria in vulnerable populations such as children and pregnant women, and malaria patients with co-infections, accelerating the development of new combination drug treatments, and advancing candidate malaria vaccines. 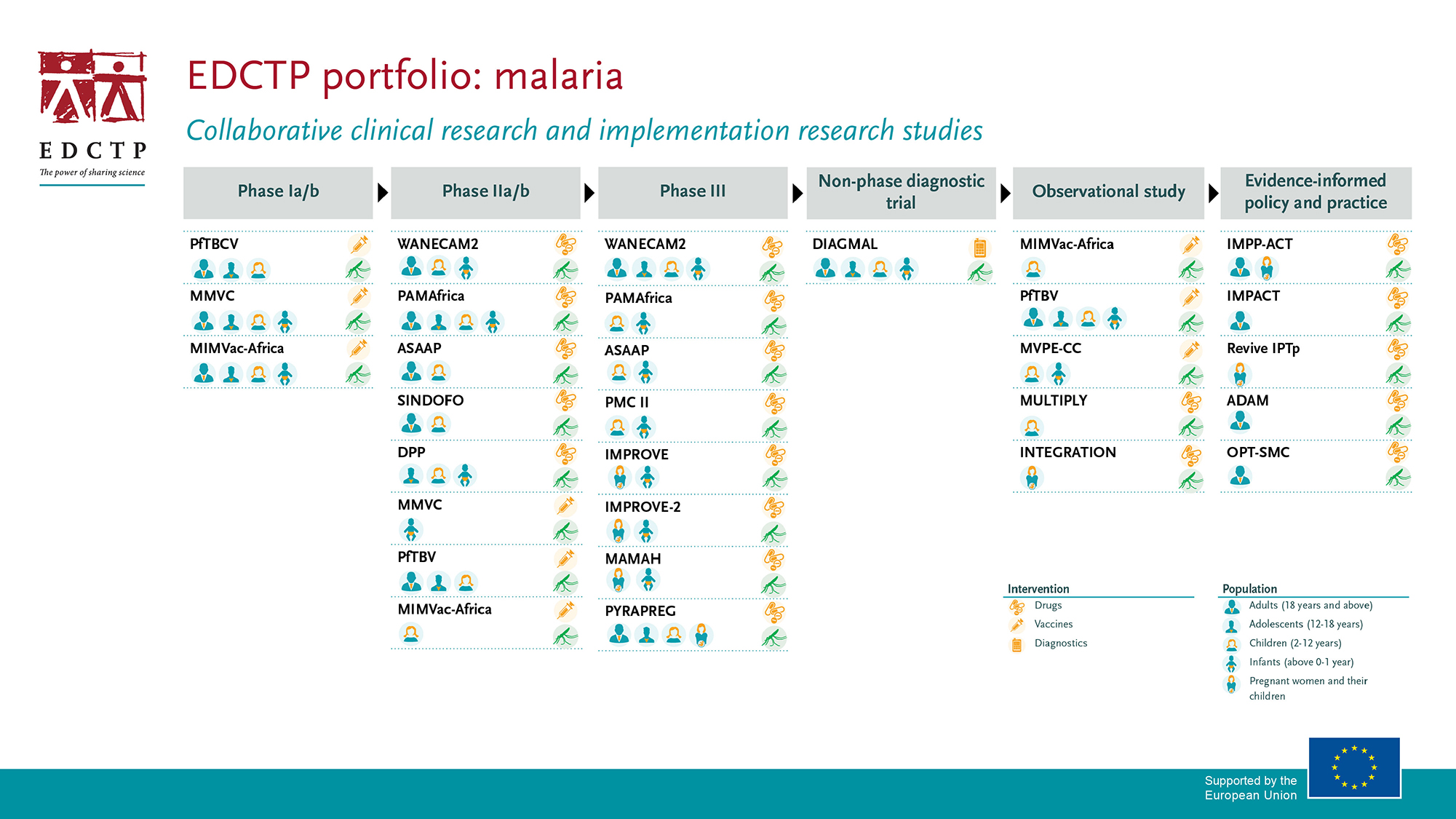 The West African Network for Clinical Trials of Antimalarial (WANECAM-2) network is conducting clinical trials of a novel antimalarial combination comprising KAF156 (ganaplacide) and lumefantrine (LUM-SDF) in a once-daily formulation. KAF156 has demonstrated the potential to treat resistant malaria and to be administered as a single dose. This EDCTP-supported network is led and coordinated by Professor Abdoulaye Djimdé of the Université des Sciences, des Techniques et des Technologies de Bamako (USTTB), Bamako, Mali, with partners from Burkina Faso, France, Gabon, Germany, the Netherlands, Niger, Sweden, Switzerland, and the United Kingdom. It is a unique collaboration of ten academic institutions, in collaboration with a pharmaceutical company, Novartis AG, and a not-for-profit product development partnership (PDP), Medicines for Malaria Venture (MMV). EDCTP is investing EUR 10 million in the project, which has additional funding from the German Federal Ministry for Education and Research (BMBF).

A multicenter, open-label, randomised phase II study in adolescents and children with confirmed acute uncomplicated P. falciparum malaria is taking place in Burkina Faso, Gabon and Mali. This study evaluates the efficacy of a two-day dose regimen of KAF156 combined with the new Solid Dispersion Formulation of lumefantrine (LUM-SDF) in a run-in cohort of malaria patients who are 12 to 18 years old, before younger patients can be assessed. Then, efficacy, safety and tolerability of the novel combination of KAF156 and LUM-SDF will be evaluated in younger patients under fasted and fed conditions in two age-descending cohorts. In cohort 1, patients of 2 to 12 years old were recruited and in cohort 2, patients of 6 months to 2 years old will be recruited. 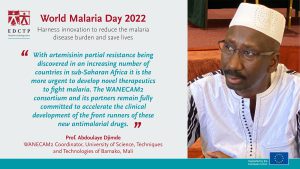 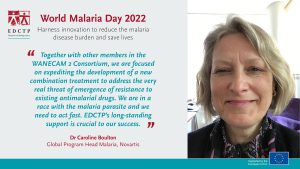 Highlighted: Portfolio approach to developing the next generation of malaria treatments for Africa (PAMAfrica)

The PAMAfrica research consortium conducts three clinical trials, supporting efforts to build clinical capacity across Africa. The first trial explores new combinations of compounds, including new chemical classes, for the treatment of uncomplicated malaria in adults and children. These compounds are all known to be fully active against all drug-resistant strains, including the artemisinin-resistant Kelch13 strains. The second trial, a phase II study (CALINA; NCT04300309), tests the safety, tolerability and efficacy of a novel formulation/ratio of the current gold standard treatment artemether-lumefantrine as dispersible tablet in infants and neonates weighing less than 5 kg or who are malnourished.  The cohort involving infants older than 28 days old has now been completed and the study will progress to a neonates group less than 28 days old. This clinical trial is taking place in Burkina Faso, Democratic Republic of Congo, Kenya, Mali, Nigeria and Zambia.

In the third study, the consortium will assess the efficacy and safety of up to three different dosing regimens of a new generation, rapid-acting treatment compound named cipargamin (also known KAE609), to be administered intravenously in adults and children patients presenting severe malaria.

The project is coordinated by Dr Tim Wells from Medicines for Malaria Venture (MMV), Switzerland, in partnership with seven research institutions in Burkina Faso, Gabon, Germany, Mozambique, Spain, Switzerland and Uganda. EDCTP granted the PAMAfrica research consortium €21.9 million over a five-year period to be matched by funding from MMV, Novartis and partners.

While the current generation of artemisinin-based combination therapies is still effective, there is a growing risk of drug resistance. New combination treatments with three or more compounds may help to delay or prevent resistance. The ASAAP study assesses the efficacy of artemether-lumefantrine (AL) in combination with atovaquone–proguanil (AP), a triple-therapy for treatment of uncomplicated malaria in African children.

In response to the growing risk of resistance to ACTs and the likely benefit as transmission-blocking agent, an artemisinin-based triple therapy with artemether-lumefantrine (AL) and atovaquone-proguanil (AP) pilot study for the treatment of uncomplicated malaria in adults and adolescents was implemented in Gabon. The preliminary data analysis from the phase II pilot study showed a good safety and tolerability profile of the tested triple ACT combination.  After these promising findings, a large clinical study of the same triple ACT combination is currently being assessed in children in Benin, Burkina Faso, Gabon, Ghana and Mali. The study is coordinated by Dr Oumou Maiga-Ascofare of the Kumasi Centre for Collaborative Research at the Kwame Nkrumah University of Science and Technology in Kumasi, Ghana. It is conducted in collaboration with six research institutions in Benin, Burkina Faso, France, Gabon, Germany and Mali. EDCTP is investing EUR 7.6 million in the project, including funding from the German Federal Ministry for Education and Research (BMBF). 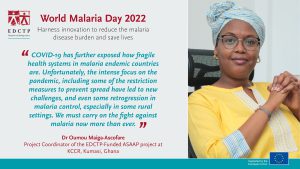 As resistance to artemisinin-based combination therapies is increasing in sub-Saharan Africa, an EDCTP Participating State Initiated Activity funded by the Ugandan Ministry of Health aimed to reassess the malaria treatment efficacies at three sites in Uganda with different malaria transmission intensities (Apac, Arua and Busia). The study consisted of a randomised, open-label, longitudinal phase IV clinical trial to test the efficacy and safety of artemether-lumefantrine (AL) and dihydroartemisinin-piperaquine (DP) for the treatment of children aged 6 months to 10 years with uncomplicated Plasmodium falciparum malaria.

The trial concluded that DP remains highly effective for the treatment of uncomplicated malaria in Uganda. The study results also suggest that clinically relevant resistance to artemether-lumefantrine and dihydroartemisinin-piperaquine continues to be absent in Uganda, consistent with recent reports based on ex-vivo drug susceptibility. Both drugs therefore remain appropriate for the treatment of uncomplicated malaria in Uganda, however, there is a need for routine monitoring of the efficacy of antimalarials. The results of the study have informed the Ministry of Health Policy treatment guidelines for uncomplicated malaria, working closely with local governments and the Village Health Teams serving at community levels in Uganda.

On 6 October 2021, the World Health Organization (WHO) recommended widespread use of the RTS,S/AS01 (RTS,S) malaria vaccine among children in sub-Saharan Africa (SSA) and in other regions with moderate to high P. falciparum malaria transmission. The WHO-coordinated Malaria Vaccine Implementation Programme (MVIP) supports the pilot implementation of the RTS,S vaccine by the immunisation programmes in Ghana, Kenya, and Malawi. Independent of vaccine implementation, evaluation partners measure feasibility of reaching children with the recommended 4-dose schedule, and vaccine impact and safety in routine use. The evaluation component of the MVIP is referred to as the Malaria Vaccine Programme Evaluation (MVPE).

EDCTP funds the project ‘Strengthening the evidence for policy on the RTS,S/AS01 malaria vaccine: assessment of safety and effectiveness using case-control studies embedded in the Malaria Vaccine Pilot Evaluation (MVPE-CC)’. This project embeds case-control studies into the MVPE, leveraging the MVPE surveillance systems and processes. Case-control studies will address questions that have emerged since the MVIP was designed, and the findings will provide timely, important evidence to inform global policy decisions and will serve to maximise national adoption and uptake.

Positive results from an EDCTP-funded clinical trial in Burkina Faso, published in The Lancet, demonstrate that the malaria vaccine candidate R21/Matrix-M is safe, immunogenic and has an efficacy of 77%, exceeding the WHO goal of 75% efficacy for malaria vaccines. The trial in Burkina Faso was led by the clinical trial investigator, Professor Halidou Tinto of the Institute of Research in Health Sciences (IRSS) in Burkina Faso, as a part of the Multi-Stage Malaria Vaccine Consortium (MMVC). This Europe-Africa malaria vaccine consortium, led by Professor Adrian Hill (University of Oxford) and supported by a EUR 15 million grant from EDCTP, aims to develop the first multi-stage vaccine for malaria, designed to target all four life cycle stages of the Plasmodium falciparum parasite. Following the positive phase IIb trial supported by EDCTP, the University of Oxford and partners are conducting the pivotal phase III trial.

Malaria is the second biggest killer in Mozambique, with an estimated nine million cases every year and more than 14,000 deaths. In past decades, a range of elimination projects have been organised in the south of the country, where transmission is lowest. Although the number of cases has fallen, elimination has not been achieved. With elimination being part of the Global Technical Strategy for Malaria up to 2030, elimination in this area could be a stepping stone to national elimination in Mozambique.

The Mozambique National Malaria Control Programme has included the goal of elimination of malaria in areas of low transmission intensity in its national malaria strategic plan for 2017–2022. The ADAM project is supporting the National Malaria Control Programme, one of the three project partners, in developing guidelines to inform the use of the mass drug administration strategy. Through consultation with key stakeholders, it is developing a delivery strategy and monitoring plan for introduction of population-wide and follow-up targeted mass drug administration into routine programmes. It is also developing data collection and visualisation systems to facilitate monitoring of activities.

The ADAM project is led by the Fundaçao Manhiça, Mozambique in partnership with the Fundación Privada Instituto de Salud Global Barcelona (ISGLobal), Spain. It collaborates with the NMCP in Mozambique. The project is co-funded by EDCTP and the South African Medical Research Council (SA MRC).

Intermittent Preventive Treatment of malaria in infants (IPTi) with sulfadoxine-pyrimethamine (SP) is a safe, affordable, and effective intervention for preventing malaria in infants which has shown to reduce rates of clinical malaria, anaemia and hospital admissions in children under one year of age by 30% and 21%, respectively. The WHO recommended its use for malaria prevention in this high-risk group since 2010; however, IPTi implementation has not been widely adopted in Africa and to date only Sierra Leone has adopted the IPTi intervention into policy and practice.

The MULTIPLY project aims to deliver the IPTi intervention in infants through the Expanded Program on Immunization (EPI) as a feasible, sustainable, equitable and cost-effective strategy to prevent malaria in infants living in areas of moderate-to-high transmission in sub-Saharan Africa. Specifically, the investigators aim to administer up to six doses of IPTi in the first two years of life alongside vaccinations and Vitamin A supplementation delivered through the EPI. The study is being implemented in Mozambique, Togo and Sierra Leone which have different levels of SP resistance, malaria seasonality transmission patterns, different implementation of Seasonal Malaria Chemoprevention (SMC) programmes, and different implementation of IPTi as a national policy (like in Sierra Leone).

The improved IPTi intervention in Sierra Leone began in February 2022, to be followed by Togo in May 2022, and Mozambique in June 2022. Around 45,000 children, 15,000 per country, will receive up to six doses of IPTi for two years. If successful, it is expected that this intervention will be scaled up to include other regions/countries with moderate-to-high malaria transmission.