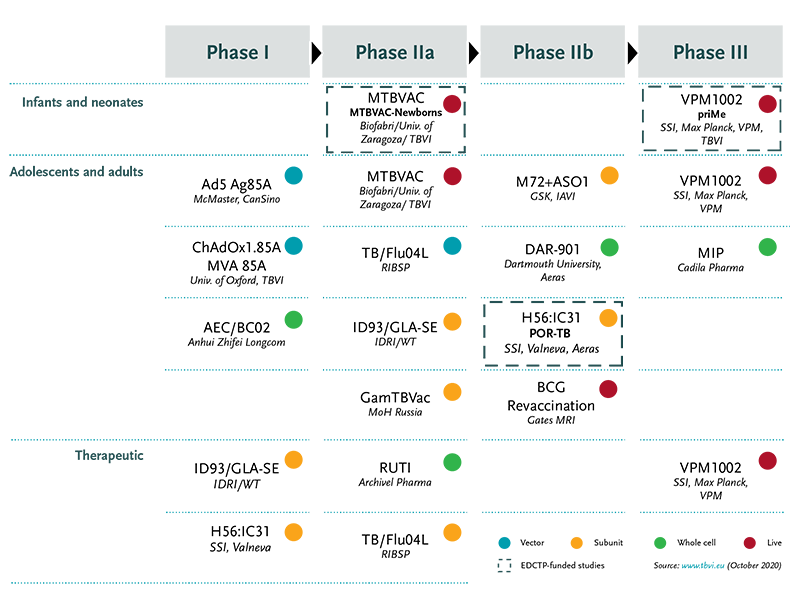 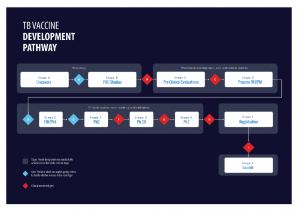 EDCTP supports the development of vaccines for tuberculosis through three collaborative research projects:

The MTBVAC-Newborns study will determine whether a weakened form of the TB bacterium is suitable for large-scale trials – potentially offering a better alternative to BCG.

BCG (Bacillus Calmette-Guérin) has been used to protect newborn infants against TB for nearly 100 years. It is a weakened (attenuated) form of the bacterium that causes TB in cattle, Mycobacterium bovis. It was developed by repeated culturing of M. bovis and selection for strains that stimulated anti-TB immune responses but did not cause disease.

Although BCG offers generally good protection to newborn infants, it has many drawbacks and is significantly less effective in older age groups. In part, this reflects the fact that attenuation led to the loss not just of genes that trigger disease but also of others that stimulate strong immune responses. Using this knowledge, the MTBVAC team has developed a new vaccine based on M. tuberculosis which has been precisely engineered to eliminate genes central to disease while maintaining those lost in BCG that provoke strong immune responses.

MTBVAC has been shown to be safe in healthy adult volunteers and in a small number of newborn infants in South Africa; it appears to stimulate an immune response as least as strong as BCG. In a new trial, the MTBVAC team is carrying out a larger trial in newborn infants in South Africa to evaluate the safety of increasing doses of MTBVAC and the strength of anti-TB immune responses, in comparison with BCG. In parallel, the consortium is building capacity for future large-scale trials in Senegal and Madagascar, which have a high burden of TB.

In theory, MTBVAC should provide better protection in older age groups, but it is also important to determine whether it is a suitable alternative to BCG. Positive results would pave the way to a pivotal phase III trial that would provide definitive evidence of MTBVAC’s efficacy in newborn infants compared with BCG.

The priMe study will reveal whether a promising alternative to BCG is safe and effective for use in newborn infants.

The BCG (Bacillus Calmette-Guérin) vaccine has been used to vaccinate against TB since the 1920s. It is reasonably effective at preventing serious disease, but many vaccinated infants still develop TB meningitis and it appears to have little impact on the spread of pulmonary TB. Modelling studies suggest that, despite BCG, around 7.5 million children were infected with Mycobacterium tuberculosis in 2010 and 650,000 developed TB disease.

BCG is a weakened or attenuated version of Mycobacterium bovis, a relative of M. tuberculosis that causes TB in cattle. Researchers have recently revisited M. bovis and introduced precise genetic changes that cause it to stimulate stronger immune responses and make it safer for use in individuals with HIV, who sometimes suffer reactions to conventional BCG.

The large-scale phase III priMe study will build on promising preliminary trials, in adults and children, of this updated version of BCG, known as VPM1002. Aiming to recruit around 7000 newborns, it will provide definitive evidence of the safety and efficacy of VPM1002 in both HIV-free and HIV-infected newborn infants.

Positive findings would indicate that VPM1002 is a suitable alternative to BCG, widely recognised to be an imperfect vaccine but included in most countries’ routine immunisation programmes; it would also provide a suitable vaccine for infants with HIV. Furthermore, production methods for VPM1002 are relatively simple and straightforward to scale up, so the vaccine could meet global demand and overcome some of the supply difficulties recently experienced with BCG. The priMe study will also generate important data on the immune responses associated with good protection against M. tuberculosis, to enhance the design of future vaccines.

Project title: A multicenter Phase III double-blind, randomized, controlled study to evaluate the efficacy and safety of VPM1002 in comparison to BCG

The POR TB trial is evaluating a novel strategy for protecting against TB – preventing latent infections from springing back to life.

Most TB vaccines aim to prevent new infections. However, an estimated 2 billion people are already infected with Mycobacterium tuberculosis. Although 1.5 million lives are lost to TB every year, not everyone with an M. tuberculosis infection develops clinical disease. Hence an alternative goal for vaccination is to promote immune responses that keep an existing infection in check – which is likely to require a different type of vaccine from one designed to prevent initial infection.

The POR TB team has developed a candidate vaccine, known as H56:IC31, that has been specifically designed to protect people already exposed to M. tuberculosis. It is based on a fusion protein (known as H56) containing antigens made by M. tuberculosis at different stages of its life cycle, combined with an adjuvant (IC31). Preliminary clinical trials have shown that H56:IC31 is safe and stimulates good immune responses of the kind thought likely to be protective.

The POR TB consortium is now carrying out a larger phase II trial, to assess the safety and efficacy of H56:IC31 using a ‘prevention of recurrence’ approach not previously applied to TB. Even after successful treatment of TB, up to 10% of patients experience a relapse – their TB returns, following reinfection or reawakening of dormant bacteria that survived initial treatments. Preventing recurrence would improve the success of treatments and reduce the spread of TB.

In the placebo-controlled POR TB trial, H56:IC31 will be given to TB patients who have successfully completed 6 months of standard TB treatment. Patients will be monitored for 2 years for recurrence of their TB.

Complementing preventive vaccines such as BCG, H56:IC31 could enhance the long-term success rates of TB drug treatments. Potentially, by stimulating host responses to infection, it could also provide a route to shortened drug treatments.

The POR TB consortium is also piloting a novel clinical trial approach and measures of success that could be adopted for evaluation of similar products. Finally, the trial will also generate data on the elements of the immune response and features of M. tuberculosis that are associated with recurrence or the success of vaccination to prevent recurrence.

The MTBVACN3 project is evaluating an innovative new vaccine that could provide newborn babies with better protection against TB.

Every year, 10 million people fall ill with TB and 1.5 million die. Elimination of TB, the goal of WHO’s End TB campaign, will not be possible without a TB vaccine. Modelling suggests that an adult vaccine would have the greatest impact on disease, but an optimal strategy would be to combine an adult vaccine with universal vaccination of newborn babies.

Exciting progress is being made in TB vaccine development. One promising candidate is MTBVAC, being developed by an international public–private partnership. MTBVAC is an engineered form of Mycobacterium tuberculosis that lacks two critical virulence factors, rendering it much less harmful but retaining many of the immune-stimulating antigens that are absent from the currently used TB vaccine, BCG.

The MTBVACN3 project aims to build on encouraging experience to date and extend use of MTBVAC to newborn babies. Phase I studies have shown that MTBVAC is as safe as BCG and at least as immunogenic. Phase I studies have also demonstrated the safety of MTBVAC in a TB-endemic setting, South Africa, at a range of doses and in infants and newborns. As well as confirming MTBVAC’s safety, these studies also showed that immune responses were more powerful than those seen in response to BCG.

An EDCTP-funded phase IIa trial in newborns began in 2019 and has completed enrolment in 2021. This trial is designed to identify the most appropriate dose of MTBVAC for subsequent testing in the phase III trial MTBVACN3. The MTBVACN3 trial which is scheduled to start in 2022 is a pivotal phase III trial to assess the protective efficacy, safety, and immunogenicity of MTBVAC in newborns, including those exposed to HIV but uninfected.

After an initial safety and immunogenicity evaluation at six sites in Senegal, Madagascar and South Africa to confirm dosage, the full trial will recruit 6,400 newborns at four sites in South Africa. As the incidence of TB is far higher in South Africa, a smaller number of newborns will need to be recruited to evaluate the efficacy, while the studies in Senegal and Madagascar will provide evidence of the likely generalisability of results to other settings.

The MTBVACN3 project will provide definitive evidence of the safety and efficacy of MTBVAC in newborns in comparison to BCG. It will also explore potential non-specific benefits of MTBVAC, which are seen after BCG vaccination, as well as immune correlates of protection. By running alongside studies in adults, the project will ensure that newborn babies and children rapidly benefit from an innovative new TB vaccine, while also making an important contribution to global campaigns to control and eliminate TB.