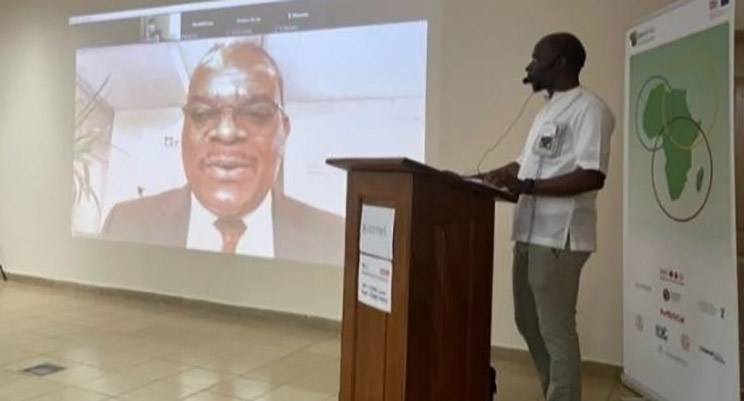 The PAMAfrica and SINDOFO consortia held a joint annual meeting at CERMEL’s in Lambaréné, Gabon, from 20 to 22 September 2022.

PAMAfrica is led and coordinated by Dr Timothy Wells of the Medicines for Malaria Venture (MMV), Switzerland, with partners from Burkina Faso, Gabon, Germany, Mozambique, Spain, Switzerland and Uganda. SINDOFO is led and coordinated by Dr Jana Held of the Eberhard Karls Universität Tübingen (EKUT), Germany, with partners from Burkina Faso, Gabon, Kenya, Mozambique, Spain and Switzerland. Six partners are involved in both consortia and agreed on this occasion in organising their annual investigators’ meetings back-to-back. The meeting was attended by 52 participants from 12 institutions from nine countries, including four attendees joining online and representatives from EDCTP. Dr Michael Makanga, Executive Director of EDCTP participated virtually on day two and Dr Montserrat Blázquez-Domingo, EDCTP Senior Project Officer, participated in person on all meetings days.

Day one was dedicated to PAMAfrica with the participation of PAMAfrica partners only and the meeting was opened by Dr Ghyslain Mombo-Ngoma, Head, Clinical Operations at CERMEL, followed by welcome notes from CERMEL’s leadership representatives, Prof. Bertrand Lell and Prof. Peter Kremsner, and a keynote speech from Dr Julien Meyong, Regional Director from the Gabonese Ministry of Health, focusing on the major public health challenges posed by malaria and commended the work of CERMEL and its partners in fighting this deadly disease. Day one also counted with the participation of Ms Joy Phumaphi, Executive Secretary of African Leaders Malaria Alliance (ALMA), who emphasized that to accelerate malaria elimination, in Africa, there is a need to ensure correct balance in the policy and regulatory environment, build stronger capacity and capability across all relevant sectors, ensure effective management, good governance, and accountability.

The second day was a joint session opened to PAMAfrica and SINDOFO participants focusing on capacity-building aspects followed by a site visit to CERMEL’s laboratory and hospital facilities. On day two, Dr Michael Makanga, Executive Director of EDCTP2, commented on the importance of collaboration and knowledge sharing across grants with a common goal in malaria elimination. He reminded participants about the importance of thinking long-term, to develop sustainable capacity that can be deployed beyond the current clinical trials. Further, he strongly alluded to consider the interconnected and co-existence of diseases, especially in LMICs, cross-disease sharing of research infrastructures is strongly encouraged over traditional siloed approaches. He also encouraged the consortia to maximize knowledge transfer by finding ways to ensure increased participation of African colleagues in all aspects of the trials – management, governance, planning and budgeting, protocol development, and not only in study participants recruited into clinical trials.

The capacity building session was introduced by Ms Teresa Eduardo Machai, Head of Training at the Manhiça Health Research Center (CISM), Mozambique and by Dr Quique Bassat, Head Malaria Programme at ISGlobal, Spain. The cross-cutting meeting session focused abou the challenges in research capacity in African countries, such as the lack of equity in health, the decolonizing global health movement, structural factors contributing to inequity, and importantly, challenges faced by African early career researchers as well as wider challenges in research capacity in Africa.

The participants were then divided into five groups and asked to discuss ‘The future of capacity building, innovative solutions for research capacity development in collaborative projects’, and thereafter to report to plenary. Noteworthy, a good practice document referenced by both Dr Eusebio Macete and Dr Michael Makanga, in their interventions, namely: Four Approaches to Supporting Equitable Research Partnerships was launched on 20 September 2022 by the UK Collaborative on Development Research (UKCDR) and ESSENCE on Health Research initiative. The document is developed by a global task force of research funders, including EDCTP, and aims to support equity in research partnerships by assisting funders, research organizations and researchers to improve their ways of working in multi-country research consortia, particularly in relation to LMIC settings.

Day three was dedicated to SINDOFO with the participation of SINDOFO partners only. The meeting was introduced by Dr Jana Held, who gave an overview of the study, including commenting on the revised clinical trial timelines, expected to start in Q2-2023. In capacity-building activities, the consortium has selected all PhD candidates, and face-to-face short-term trainings are planned in the upcoming period of the grant, including other training in synergy with the PAMAfrica consortium.

Following the introductory session, Zydus Lifesciences, a pharma company with its headquarters located in India, was presented as the new clinical trial sponsor, replacing MMV’s sponsor responsibilities within the SINDOFO project. Dr Mukul Jain, from Zydus Lifesciences, gave an update on the product development of the ZY19489 compound (formerly MMV253), which will be used in combination with Ferroquine in the planned clinical study. Further details on the new study design were given by Dr Kevinkumar Kansagra, Principal Scientist at Zydus. Thereafter, each work package leader gave an overview of their respective field sites (research areas, personnel, resources), including the expected timeframes for protocol approval by the national ethics committees and regulatory authorities.